A vision of synergy for the exchange of knowledge, the forging of bonds and the promotion of the maritime and legal strengths of London gave birth to the London

Shipping Law Centre and provided the basis for 25 years of service to the industry.  Over 300 leading maritime professionals, gathered to celebrate the organisation’s 25th anniversary at the Savoy Hotel, London on November 27th. 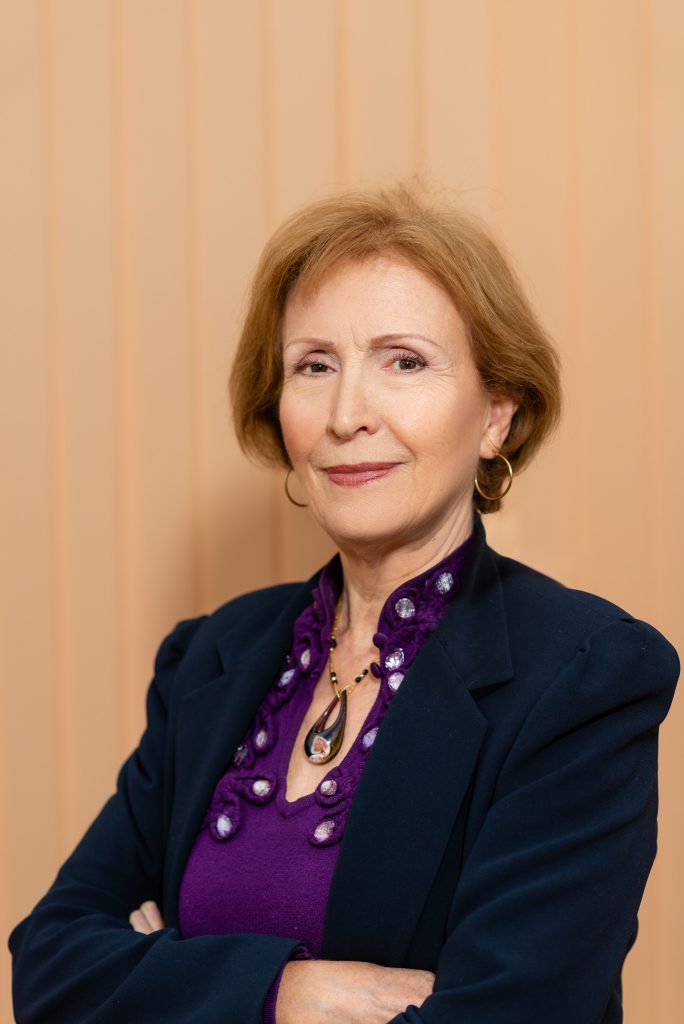 Dr Aleka Sheppard, the LSLC’s Founder and Chairman (a practising arbitrator) opened the celebration by recounting how it all began. After 14 years as a solicitor in shipping practice in the City of London, she switched to teaching and directing the shipping law courses at University College, London.

She was inspired to create something that would break barriers and unite ideas. “I realised that what this great city was lacking was a synergy between the various maritime professionals”, said Dr Sheppard. “I was looking for a magic wand to bring the industry sectors, the legal profession and academia together; and it was this vision of synergy for the exchange of knowledge, the forging of bonds, and the promotion of the maritime and legal strengths of London, that gave birth to the London Shipping Law Centre.”

The late Lord Mustill was the first to support it, followed immediately by leading maritime lawyers and industry figures who formed the first steering committee.  In 1997, the LSLC was inaugurated at the House of Lords. “The rest,” added Dr. Sheppard, “is history.”

For 25 years, the Forum has provided an unrivalled platform for informing, explaining and debating across an outstanding spectrum of maritime, legal and commercial subjects. Between 1994 and Sept 2019, the LSLC had held over 300 workshops, debates and seminars, involving interactive exchange of views. There have been breakthroughs in original thinking.  The risk management series led the way in assessing and calculating aspects of ship safety.

Reflecting on  the LSLC’s beginnings and achievements, Dr Sheppard quoted John F. Kennedy: “We choose to go to the moon, not because that will be easy but because it will be hard – because that goal will serve to organize and measure the best of our energies and skills – because that challenge is one we are unwilling to postpone and one which we intend to win.”

She thanked all of the Centre’s supporters and volunteers and stressed that the Centre had served to organize and measure the best of their creative energies and skills.  “It is not just about the learning which is unrivalled but it’s also about the cohesion and promotion of our community. We nurtured the Centre together and we have supported those who would not have an opportunity to show what they can do, including our youth.”

The Lord Thomas of Cwmgiedd, one of the UK’s most distinguished jurists, shared his reflections with the guests about the great achievements of the LSLC over the past 25 years, “the greatest being what the Centre has contributed to the youth of our maritime community. The experience and knowledge and the encouragement given to our youth is an enormous achievement.” 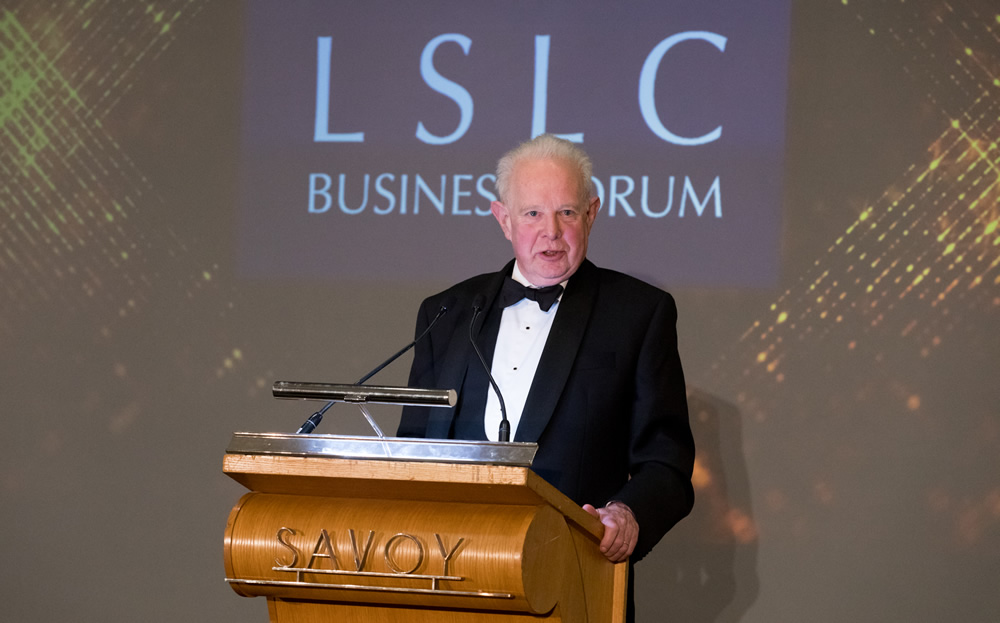 The Lord Thomas of Cwmgiedd – Speaker

Lord Thomas expressed the enormous debt of gratitude legal and shipping industry sectors owed to Dr Sheppard and her team, and outlined five key reasons of Dr Sheppard’s success: “understanding the business of shipping,  capitalization on the ideas of all sectors, recognising the importance of jurisdictions, the importance of continued education, making the law coherent and bringing international learning together.”

Lord Thomas stressed the importance of the concept of good faith and how Dr Sheppard’ s vision united the shipping world and academia in the true meaning of “good faith”.

The legacy set by Dr Sheppard and the LSLC was one of strong ethical standards and leadership. “The Centre is a centre of leadership. Armed with these values, “our future will be one worth fighting for,” concluded Lord Thomas.

Mattheos Los, who has been heavily involved in shipping issues throughout the Forum’s lifetime, summarised the huge changes that have taken place in the industry in the past 25 years. In a context of globalisation and increasing regulation, these included vessel cost, financing purchases, stock market investment by people who knew nothing of shipping, the development of gas carriers and containerships and changing crewing patterns. 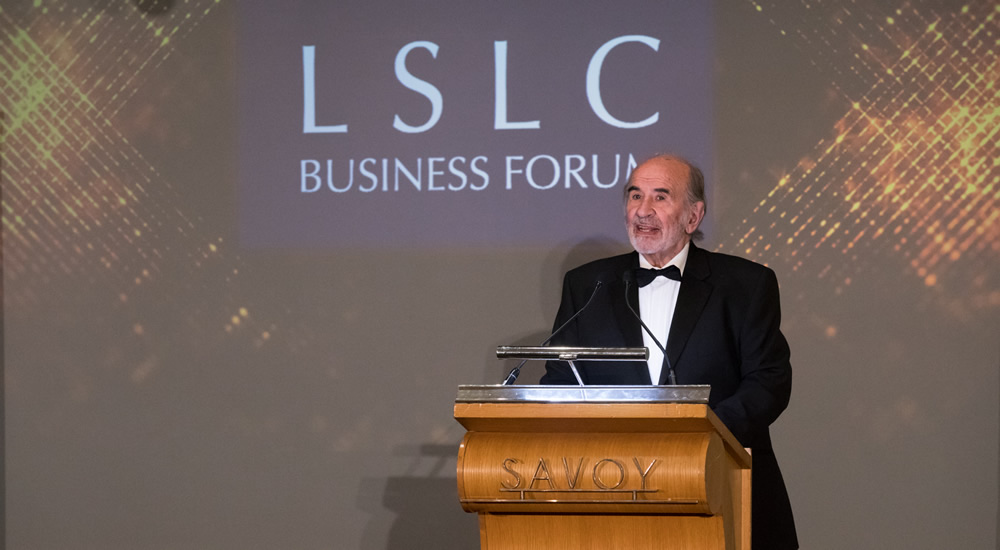 He highlighted subjects tackled by the LSLC. “The tireless efforts of the Centre have produced the Cadwallader debates and an endless number of seminars, mock trials, workshops and lectures. These have given life and colour to their subjects for aspiring students, shipping lawyers and maritime professionals by providing an invaluable forum for showing what the many regulations signify, how they are implemented and how they can affect the day to day life of the legal practitioner.”

Mr George Tsavliris quoted Darwin in stressing “the ability to adapt” as a key mindset we all need to have to address our future.”  Mr Tsavliris thanked Dr Sheppard, Gerard Matthews, and all involved in the committees of the LSLC, for their contribution from which the shipping and education sectors have all benefited.

The Centre donated 10% of its sponsorship funds to the RNLI to support its invaluable work in saving lives at sea and the guests topped up the fund by making generous contributions on the night.